In my reading about watches I learned that the wrist watch was the product of war.  Pocket watches were worn in elaborate straps to hold them on the wrist.  Timing was critical and who had radios...let alone a mobile phone!  One thing lead to another.  It became customary to engrave the back of the watch one's name and service.  A form of current day dog tags which were not mandated until 1916 by the US Army.  The tradition continued, even after dog tags were introduced, to engrave the back of a watch with the details of the owner.  All of this investigation and the discovery of my Grandfather's "very" engraved watch connected a few dots.  When my mother gave me my "lifetime watch", she lamented the store would not engrave my watch.  Makes me wonder how Joanne Woodward had "Drive Carefully - Me" on the back of her betrothed's watch? 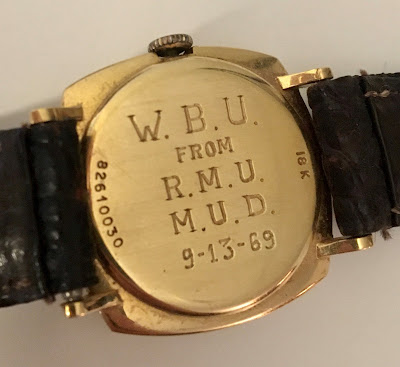 Deep runs the tradition of engraving an inscription of the back of a watch.  Which to me, makes the WBU watch all that much more interesting.  Perhaps more entertaining than interesting to some.  It clearly  highlights the the practice which seems to have diminished today.  I wonder if the watch was chosen more because it was the most suitable to engrave over other watches in the case?  It seems like an unlikely brand to be in a jewelry store in Westerly, RI.

The watch belonged to my Grandfather.  My daughter now occasionally dawns this watch with a tired alligator band for nice occasions.  I recall with some humor and dismay that she announced the watch was "broken" because it would not run.  That was rectified once I explained to her how to wind a watch.  Imagine!

As for the watch itself, not much is known.  Google searches have not yielded any specific details for this novice watch collector.  Girard Perregaux was a quality Swiss watch maker unlike Rolex which contracted others to make their watches of the same era. 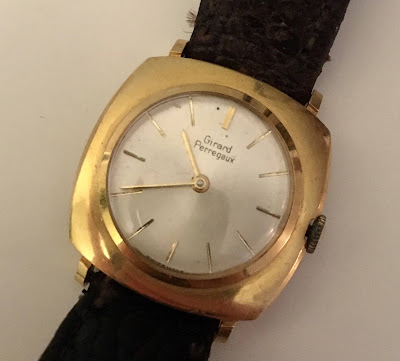 Should anyone have more information or can point me to where I can learn more about the watch I would appreciate adding a comment.  The case design is called a "cushion case".  I have not opened it because I am not an expert.  My unprofessional opinion is the crown was changed to make it easier to wind.  It does run when wound.  Dimensions to follow when I get organized.

A new alligator band would freshen up this watch.  It is too small for a man to wear today and looks best on a woman.  Tastes have changed.  Perhaps someday it will be worn with family pride.

Better photos to come, but for now, this is a start.